Don’t worry, I won’t give you a report on how my avatar rides through the virtual world of Watopia. I’m afraid this is going to be a rather nerdy race report The beauty of racing on the indoor trainer is that the external influences are very small and easy to control, so you get nice, clean data. Almost like in laboratory conditions.

So last Sunday morning I sat there at right on time at 9:20am, exactly 45min before the start, in my “lab” to start my meticulously timed warmup. I like it so much to have everything under control. As long as the WLAN, ANT+ and Bluetooth connections are up and running, nothing can go wrong. Even if a storm is just about to start outside.

Nevertheless I am super excited. In theory it’s the same as the eight previous races of the Zwift Tri Series, but this time there is an official DTU Triathlon Bundesliga ranking. I compete with my team in the 2nd Bundesliga North and from what I’ ve seen before, the race is quite a big thing. Nobody wants to start here in bad shape.

Also I had prepared myself more purposefully for the race. Unlike in the series, where I just raced “out of training”, this time I had prescribed a mini-tapering of 4 days.

But as soon as the virtual starting gun was fired, I no longer feel the excitement consciously. The start phase was fast as usual, I was riding 340W over the 1st minute, but the speed dropped again much earlier than usual. I was fine with that, as my plan was to stay in the first group as long as possible. So I needed “only” 250W on average over the first 10min to stay close to the front.

With the exception of the fast start and sprint to the line, the power profile is more like a time trial. Besides a few bumps, the gradients were not too steep, so I was able to ride quite consistently. This is also shown by the Variability Index (VI) of 1.04 (over the whole race); if you neglect the first 3 and the last minute it is even only 1.02. Apart from short ramps or when I wanted to close a gap, which required short peaks above 300W, I theoretically rode a pretty well paced time trial.

The experience I’ve gained from previous races has given me a good sense of my power output in relation to duration. Nevertheless, I optimistically calculated a few extra watts for the fresh legs and the race atmosphere.

Tactics and the second half

At the longest climb after about half the race distance, I decided to stick to my power, which I hoped I could keep up, instead of staying in the lead group, where it was only a matter of time before I would collapse. The drafting effect is much less uphill and as the group was falling apart anyway, I would never ride alone. In addition, it was very hot, no matter how many fans you had, so the heart rate was already very high. Due to the usual drift of the heart rate, the pulse would end up in such high ranges that I normally don’t reach even in the race, and probably become a limiting factor of my performance. Therefore I tried to avoid too high workloads at this time by not going over my limit (i.e. FTP) for long / often.

At the upper parts of the climb and especially on the second climb before the final descent to the finish, the tactics paid off. I, and fortunately the rest of my small group as well, were able to keep up the power constantly (236W on the first vs. 237W on the second climb), while other riders dropped out of the front group. As expected, the stress on my cardiovascular system increased steadily (179bpm on the first vs. 184bpm on the second climb). This is also shown by an Aerobic Decoupling (Pw:Hr) of 12.83%, which compares the efficiency factor (EF) of the first half of the race with the second half. Put simply, the efficiency factor indicates how many watts the body can produce with the same cardiovascular effort. Actually, this metric is used to determine an improvement in cardiovascular fitness over several training sessions. This would mean that more power can be produced with the same cardiovascular effort, i.e. the body works more efficiently.

In a race (or even in hard training) the exact opposite happens in the short term. Through accumulation of lactate and other inhibiting substances, lack of energy, increase in body temperature, etc. the body works more and more inefficiently in relation to the power output. So for every watt that the body wants to produce, it has to work more from a cardiovascular point of view.

So the higher the difference in efficiency factor between the first half and the second half of the race, the higher the degree of acute fatigue. In other words, my body is 12.83% less efficient (in regards to power output) in the second half of the race, or my heart had to work 12.83% more for every watt I put down (and that was pretty consistent throughout the race).
The result was a maximum heart rate of 194bpm. I had never seen this number on my display before, even while running.

Final numbers and sprint for the line

The sprint for the finish (332W over the last minute) was not outstanding at all, but (luckily) it didn’t have to be. Since my tactics worked out perfectly, I had an advantage on the last climb over the leader in the 2nd Bundesliga North and was able to keep it on the flat until the finish.

Of course such a Zwift race is different from a “real” bike race or a triathlon! Nevertheless, I’m happy I had such a successful race, because it not only shows me that the training is going well and that I’m on the right track to achieve whatever this season may bring, but it also means a lot of fun! 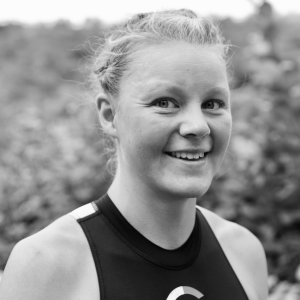